So I’m working on some stuff this week, and needed to move a project into FCP 7. Ran the fcpxml through Xto7 and spent about 5-10 minutes deleting disabled audio channels, and importing the GFX I had done in X that can’t be done in 7. Then, for laughs, I imported the sequence into PrCC.

In X, I had done some title cards, a quad split in a compound clip with Motion Generator animating dividing lines, some basic color corrections and a few effects added to some shots. I had to export the cards and the quad split thing as comped movies because the title tools in other NLE’s suck, and neither 7 or Pr could easily do the line animation stuff. Certainly possible, but more of a PITA than in X.

However, that tech crap isn’t the point of this bit of babbling. The point is, that when I work on the exact same project in all 3 NLE’s, it’s really apparent how much easier it is to get things done in X. (I was gonna do it in MC too, but it’d take half the day to AMA relink the media…) Not to say that there aren’t some things I miss from 7 and Pr when I’m in X, or that X is perfect, but overall FCP X is a much more pleasant place for me to work.

Here’s a little comparison, the same spot in all 3.  For the pics, just to be fair, I broke apart the comp containing the quad split in X. Nesting stuff is OK in Pr, but awful in 7. Working in Compound Clips and using Multichannel Secondary’s in FCP X is a huge timeline clutter/eye saver. I also just left the “text” clips that were adjustment layers in X. Could have redone ’em in Pr, but not in 7. Faster just to export as a comp from X.

But seriously, explain to me why anyone would actually prefer to stare at either of the top 2 screens all day. What a mess. 😉 For what it’s worth, I do stare at Pr and 7 all day quite often, so I’m qualified to whine about it. lol

EDIT: by request, The FCP X timeline with everything collapsed added above the 3 shot. Clean! 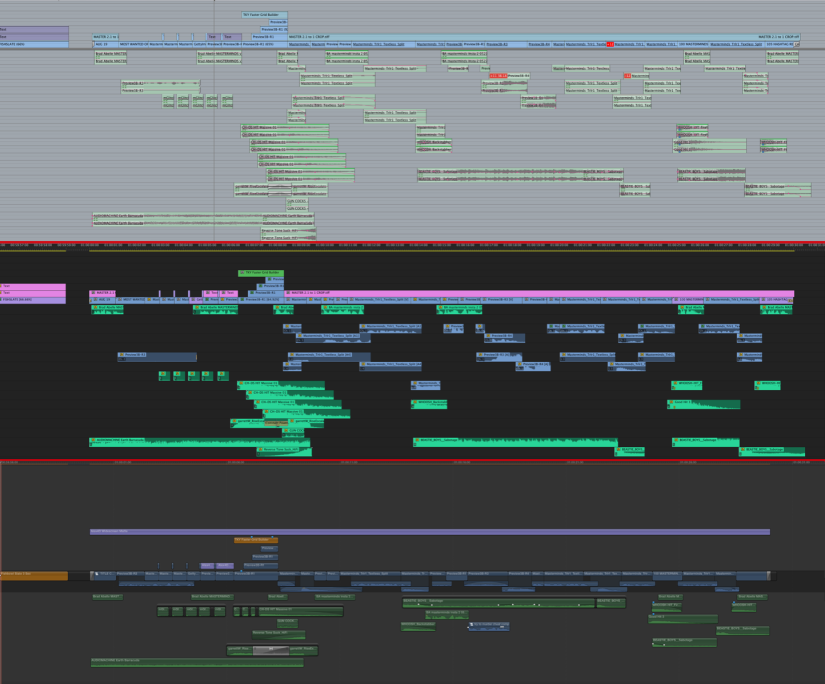