Update: 10.11 is  out. Here’s a link to essential CoreMelt updates, and an Izotope Audio Plugin workaround.

Update 2: 10.11.2 is out, and fixes the stabilization rendering issue some have reported. The TC window UI glitch is partially fixed, but numbers are still offset… Also, Izotope’s stuff works now, and most major plugins have been updated…

In the next couple days, OS X 10.11, El Capitan, will be unleashed. Generally, I’m the moron who immediately updates anything the second it appears, and I happily tell everyone else to do the same. But this time, if you’re using Pro Apps, I’d recommend holding off for a bit. And by “a bit”, I mean until Pro App and 3’rd party plugin updates appear.

That’s not to say your apps won’t work, they will.  In fact, those of you who stubbornly refuse to give up FCP 7 – (what is wrong with you?!?) – will be thrilled to learn that it still works. This is probably it’s last gasp, but it’s still kicking. 🙂

And while there are some little UI oddities, FCP X works just fine too. The problem is with plugins. El Capitan contains some fairly significant changes to the GPU code in preparation for “Metal”. It also restricts access to certain system locations, essentially making the “sandbox” more secure. 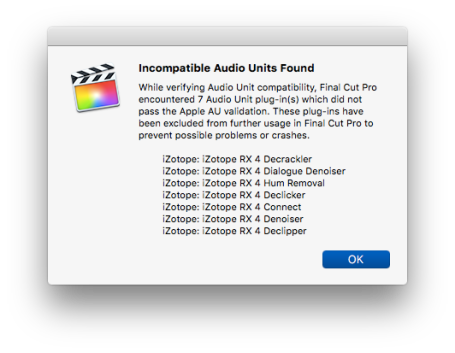 As you can see, I’ve had some issues with audio plugins, and CoreMelt has posted that the Slice/Track/Drive X plugins will need to be updated. (see updates above for fixes)  I’m sure there are others with similar issues, I haven’t really tried everything.

Ben Balser has a related post on his blog, which you may want to check out. He reports that Color Finale won’t work properly though it seems OK for me. Anyway, I’m not as strident in my warnings. Honestly, If you don’t use any 3’rd party plugins, you may be OK. But if you do, don’t dive in just yet. Leave that to fools like me!