As you’ve no doubt heard, FCP X 10.4 has been released, as well as updated versions of Motion 5 and Compressor. Along with a slew of under the hood tweaks and a lot of bug fixes (thanks Apple!) there’s some really great new stuff in this update. The headline features?

In addition, Libraries and Media on NFS drives are supported, and most of the Logic Audio Plugins have been updated to the latest versions with shiny new resizable UI’s. Oh, you can now directly import iOS iMovie projects too. 🙂 They are converted to Libraries with the the edited Project including Titles and Effects. All media is available in an Event. Happy?

This new version runs on macOS 10.12.4 or later, though, as noted, some features require 10.13 or later. Updating to FCP X 10.4 will update Libraries created by older versions of X. Everything I’ve updated has been fine but, as usual, always have backups and ZIP up your current versions of any Pro Apps just to be safe.

Also, most all the plugins I have – and I have a lot of plugins – appear to be just fine. Check for updates of course, especially if running on High Sierra.

OK… let’s have a quick look shall we?

NOTE: For a deeper dive into the big features, check out Marc Bach’s look at the Color Tools, and Alex Gollner’s look at the 360 stuff.

This has obviously been on everyone’s wish list for a while. In my opinion, it was worth the wait. These new features are really well implemented and like anything in FCP X, they’re really easy to figure out. The first thing you’ll notice is an additional permanent Inspector tab, the Color Inspector.

Selecting this brings up the (slightly redesigned) Color Board.

And, as usual, adding a correction changes “No Corrections” to “Color Board 1”. Still can’t rename it yet 😦 So, then you… hey, wait a minute… what’s this?

Color Wheels. Really nicely done color wheels, with integrated saturation and brightness adjustors. Numerical RGB adjustments and saturation/brightness sliders for each wheel are also available at the bottom of the tab.

They can be viewed as All Wheels, or Single, larger wheels

Next up, Color Curves. Same all or single view options. Use the eyedropper to select a color from the image for the curve, or click the color name to reveal a wheel with which to select a curve color.

Finally there are  Hue/Saturation Curves. Use the eyedropper on the image to select a target color for each curve, and optionally click the lower (Color) vs Saturation curve name to choose a color to adjust. The inclusion of an “ORANGE vs SAT” curve for skin tones is particularly handy. 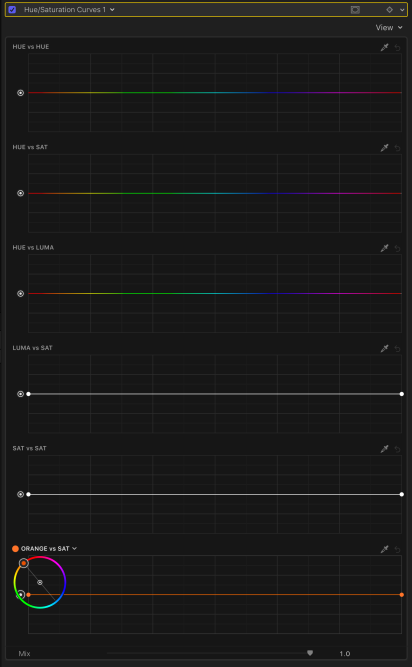 There’s also a new “Default Correction” preference, if you prefer to start with wheels or curves rather than the Color Board. 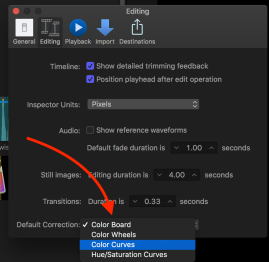 I’d also suggest poking around the Command Editor, as there are a lot of new color-specific Keyboard shortcuts available to be mapped.

In addition to the new wheels and curves, Apple has made a number of improvements and enhancements to grading and color effects in FCP X 10.4.

As noted above, all corrections can now be keyframed. The keyframes are applied to the entire correction, and keyframe timing can be adjusted in the Video Animation graph.

Individual parameters can’t yet be keyframed, but it looks like they do create separate keyframes, so who knows…

Another popular request addressed. The Balance Color effect now allows you to use the eye dropper to pick a source area for balancing. Apply the Effect as usual, then head to the Inspector to choose the method you prefer.

Color presets (built in and user created if saved to that location) have moved from the pop up menu in the Inspector to the Effects Browser. Much easier to search and preview. 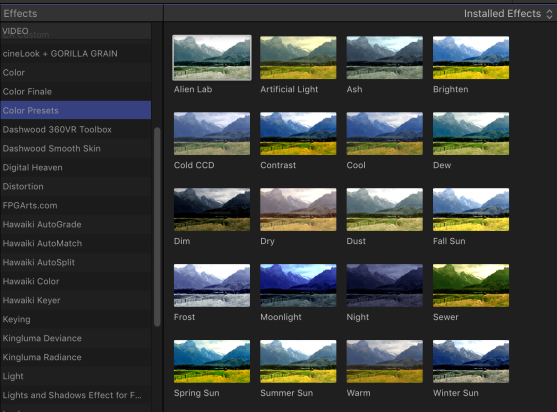 There’s a new LUT Loader Effect, from which you can select and apply LUT’s from, well, anywhere you can find LUT’s. 🙂

You can also convert I/O from SDR to HDR.

And there’s a new Tone Mapping effect to change HDR to SDR as well as a couple other conversions.

I’ll be honest, I really don’t know a whole lot about VR editing, but for those who do, this is a very welcome addition. There’s now a new 360˚ format with which to create projects. Choose Monoscopic, or Stereoscopic. Stereo output can be viewed in VR headsets via Steam VR in High Sierra. (Install Steam, then install Steam VR from the apps’ “Tools” Menu.) 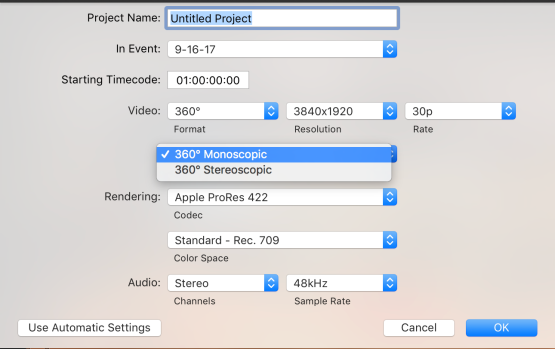 In addition, 360˚ video can be edited and reoriented in a flat Project, and flat video, GFX, stills etc can be added and positioned into 360˚ Projects. It’s very cool. There’s a new 360˚ Viewer, and both the Inspector and Viewer gain 360˚ keyframe-able Orientation controls

And there’s a new 360˚ Effects category. In any 360˚ NLE, Effects designed for regular video may behave… unexpectedly. I imagine we’ll see 360˚ versions of our favorite 3’rd party stuff fairly soon.

Importantly, .fcpxml has been updated to v.1.7 to support the new color grading, 360˚VR, and HDR features when exchanging between apps. As with any fcpxml updates, there may be some apps that will not support it yet, so you have the option to export using the previous 1.6 version. The major workflow tools, (from Intelligent Assistance, X2Pro, etc) are good to go right now.

When running on High Sierra or later, FCP X 10.4 now supports import and playback/editing of HEVC (H265) video and HEIF Images. **Exporting in H265 requires Compressor. As usual, you can either Send to Compressor, or create an HEVC “Compressor Settings” Share Destination and export directly from FCP X.

As an “audio guy”, I’m happy to see this. After being a few years behind for a while, most of the Logic Plugins have been updated to the latest versions. Updated plugins gain any new functionality as well as new, resizable UI’s. For example, here’s the old and new Compressor.

So that’s a quick poke around FCPX 10.4. There are more little things you’ll find when you update, which you should do immediately! lol Again, this update will require updating any existing Libraries, but I’ve updated dozens of them with no issues. It runs great on Sierra, but you’ll need High Sierra to “unlock” a few of the features. The grading stuff is an enormous improvement. Apple’s implementation of the stuff that’s new to FCP X is, in my opinion, much nicer than some of the alternatives. Very “FCP X” if ya know what I mean. So… back up your stuff, hit the download button and go!